Friend of Whoop ‘n’ Wail, Lizzie Milton, tells us all about her playwrighting debut, female-centric comedy, and the importance of paying her actors:

The Breaks in You and I is a lesbian break-up comedy. It is my debut production. It has a cast and crew comprised exclusively of women and I am paying all of them.

We are watching TV and it happens. It drops. All inside of me. I do not love you. In fact, I think you repulse me a bit. You know what triggered it? You farted. Right in that good bit in Being John Malkovich. And I know it seems like a little thing, but it becomes this whole big metaphor for our relationship. You, my darling wife, are dispersing your shit molecules all over the good bits of my life.

I started this piece during my MA in Writing for Performance and Dramaturgy at Goldsmiths in 2015.  About two weeks before the first draft of my dissertation was due, my partner of three and a half years broke up with me, whilst I was simultaneously going through the worst period of depression of my life thus far.

So as far as I could see it I had this choice. I could crawl into a cave of sadness and not come out for three months or I write a goddamn play about it. In the end, I did a bit of both. I didn’t really know what the play was going to be – I was scared it would be an hour of me rolling around the floor crying out ‘why did you do this to me?’ and ‘why am I so alone?’ and ‘will there ever be enough pizza to feel this hole inside of me?’ Thankfully it wasn’t. What came out was a very rough version of the play that will be staged in September. It was painful and funny all at once, as most bad things are in my experience. 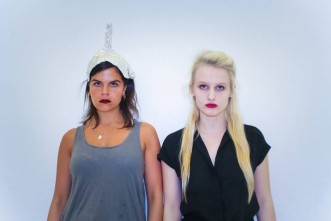 Chloe sleeps spread out like a starfish every night. Her life is full of yoga, wine and definitely not missing Joanna. Joanna hasn’t changed her pants in ten days, because she can’t work out how to use the washing machine. Oh, and she’s starting to suspect Chloe’s controlling her mind. A grotesquely comic account of breaking up, amid fried chicken, conspiracy theories and a lot of alcohol.

Chloe and Joanna came out quite naturally as a way of expressing the dichotomy of feelings I had during this period. I suppose, maybe that’s why they’re both women – in a sense, they’re both me. This of course meant that my play was a lesbian comedy about breaking up, and I honestly didn’t realise how significant this would be until we did a rehearsed reading of an extract at the Soho Theatre in June 2015. Talking to audience members afterwards, the same themes kept emerging: ‘I’ve never seen a play about lesbians before’ ‘Finally, a play about women like me!’ ‘I love that you’ve written a play with gay women without addressing their sexuality’. It’s funny really – to me it isn’t a play about lesbians, it is a play about breaking up. It just happens to be a break-up between lesbians!

Six months later, I have agreed to debut my production at The Hope theatre. As mentioned, we are paying all our cast and crew – credit has to be given to The Hope on this one, it is part of our contract with them that we pay our actors equity minimum. We’re very glad they have that policy, primarily because we strongly believe in paying artists for the work that they do, but also because, with the funds currently available to us it would have been tempting to compromise. Now we’ve done it once, it would feel wrong not to continue to, so a huge thank you to The Hope for making Dogfaced Boy a better employer!

Beause the production is unfunded – and I don’t have a spare £2000 lying around! – we’ve had to do some fundraising to get the Breaks in You and Me to the stage. We ran an amazing LGBT variety night to help raise funds – it happened just after the attacks in Orlando so ended up being a really powerful and heart-warming night.

The rest of the fundraising has been done online at https://www.gofundme.com/dogfacedboy. We’ve had some amazing donations so far and so many friends and family have been really generous. We’ve still got a way to go yet, but I’m optimistic.

So here I am now, a month before opening night. I don’t really sleep much anymore with all the work I’ve got on and I have a really tidy bedroom from all the procrastinating I’ve been doing. In a few weeks we go into the rehearsal room and I’m really excited to see what Nina, Charlotte and Holly are going to create! We hope this will be the beginning of a long life for our theatre company Dogfaced Boy, creating theatre about women, by women, for everyone.

The Breaks in You and I is written by Lizzie Milton and directed by Holly Robinson. Set design by Fié Neo. Starring Charlotte Merriam and Nina Shenkman.

One thought on “Break ups, lesbians and procrastination”