Guest blogger, actress and award winning writer Dani Moseley says  if put yourself out there, you’ll find out. 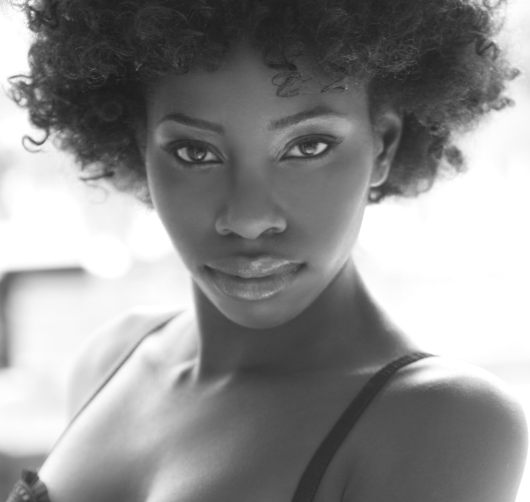 Last year summer my best friend had started acting in short, one off theatre showcases and going on about how great they were and how I should get involved. I turned my nose up at the idea, thinking: ‘I don’t need to do work like that anymore’. I know, right, who did I think I was? Lol. But, work was getting quiet and I, wanting a change from just doing youth theatre tours, trusted her so, when director Alice Bonifacio, offered me the opportunity to take part in Whoop ‘n’ Wail Represents….The Launch, I slightly reluctantly took it. 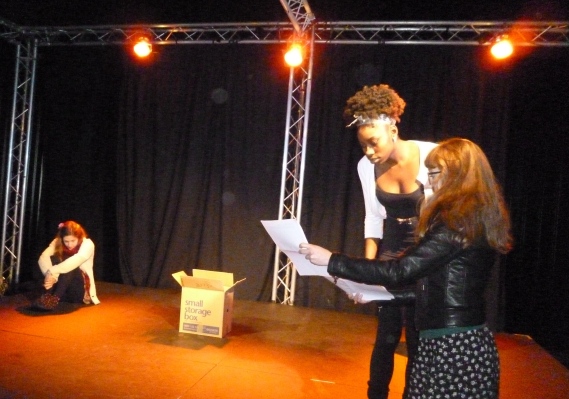 I was cast in an all female three-hander, Dan Horrigan‘s Three Women in a Music Box. The experience was great. I got to work with talented, hard working actresses – Lizzie Bourne and Thea Beyleveld – an inspiring up and coming director and Whoop ‘n’ Wail were really accommodating and approachable with anything we needed to help support the piece. It was great having a tech/dress rehearsal beforehand and having two nights to perform was so nice to learn from. Excitingly, I also received my very first review, which got 5 stars, and that was crazy for me, as I’d never been reviewed in any of the other stuff I’d done.

I hadn’t really thought about inviting anyone to see the show as it was my first time, but amazingly, a director from one of the other plays in Represents… scouted me for The Story Project at the Arcola in Dalston. I performed in The Bird Woman of Lewisham by Chino Odimba, directed by Emily Bush. And from the Arcola, one thing lead to another: I got scouted by a director there for a sight-specific piece in Leicester Square, Rivers of London by Ben Aaronovitch, directed by Eva Sampson. It was awesome and all from Whoop ‘n’ Wail Represents…, the very thing I had turned my nose up at originally.

So, when I heard Whoop ‘n’ Wail were doing another one, Represents…Desire, I was intrigued and then when the same director, Alice, sent through the Nice Jumper script by Daniel Page, I was on board, no hesitation! 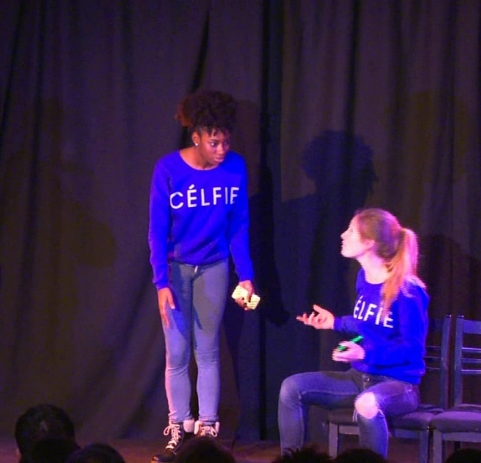 Dani and Lizzie Bourne in Nice Jumper by Daniel Page

The process and experience was even more enjoyable and joining the team was actor Anyebe Godwin. Again we got to see the other plays in the showcase, which is always nice for actors. Again the performances got reviewed and again our play got 5 stars – I even got a double personal mention for my performance!!!

So, for any actors, directors and writers sitting there reading this, thinking that small scale new writing showcases would be of no benefit to them, THINK AGAIN!

Opportunities come from any and everywhere as a creative in the entertainment industry and the fact that you get good writers, directors, actors, reviewers and the chance to invite people to come and see you, what really is of no benefit here?!

So, get off high horse or out of your comfort zone and get involved with Whoop ‘n’ Wail Represents... It all adds up to you putting yourself out there and it’s all experience on the ladder to success.

Dani Moseley is an actress and writer, winning an award for the screenplay of The Forty Elephants. She’s appeared in various TV shows such as ITV’s The Bill; BBC’s Eastenders; Sky1’s The Runaway; and London Live/web series Brothers With No Game. She has appeared on stage at the Arcola, The Cochrane, Leicester Square Theatre and The Catford Broadway. Dani’s showreel can be viewed here.

To see the 5 star reviews Dani refers to, please click here: Three Women in a Music Box and Nice Jumper

Guest blogger, actress and playwright Lizzie Bourne is looking forward to seeing how the truth will out.

Alice Bonifacio directed me in ‘Amadeus’ at the University of Edinburgh – a brilliant experience from start to finish. So when she asked if I’d be interested in being directed by her again, in ‘Three Women in a Music Box’ for Represents…The Launch, it was a no brainer.

When Alice brought Thea Beyleveld, Dani Moseley and I into that rehearsal room it was, as they say, love at first sight. We bantered as easily as the characters in Dan Horrigan’s fun, playful and poignant script, which builds up to a young girl’s first date, and relished sharing memories of our own teenage years. We had three or four meetings under Alice’s considerate direction before the performances, and enjoyed playing onstage in the safe, supportive atmosphere Debs and Ali champion for all casts. 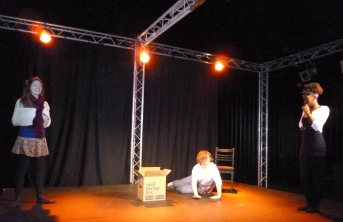 For Represents…Desire, Alice, Dani and I were happily joined by Anyebe Godwin, this time to tell a story which on its face seemed darker than ‘Three Women’, called ‘Nice Jumper’. However, the humour Daniel Page had written into it shone through, and within the creative character and intention work which is a characteristic part of Alice’s directing, each of us found a great story arc. The performance nights were even better this time: perhaps we were more consciously anticipating seeing the other plays, looking forward to being in the space with the Whoop ‘n’ Wail team again…thinking of Ali’s baked goods. Whatever it was, the night was fun and full of fresh work – but I have to admit, what we loved most was getting to wear those awesome jumpers. 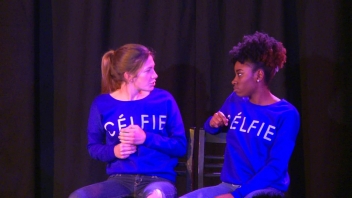 Lizzie with Dani Moseley in Nice Jumper by Daniel Page

Although I have a Creative Writing MSc, since graduating from the Oxford School of Drama acting and the pursuit of acting work has dominated (funny that). But I’d made decent money from my last Radio 4 job, so had generously and indulgently promised myself a few weeks off work to write – and low and behold, at the start of that period, the call went out for Represents…Mayday. How could I not?

Whoop ‘n’ Wail’s deal is that if your play is shortlisted and a director, unknown to you, chooses it, they will cast it and prep it – within this system Ali and Debs, in their organisational wisdom and immense capacity to involve and facilitate, allow as many people as possible to be as creative as possible. I’m looking forward to seeing how ‘The Shipping Forecast’ is interpreted by the cast in performance – it’s how I’ll hear and learn from the holes in the script, but also how I’ll be given truth I didn’t know was there.

Let’s cross our fingers, for the director and cast’s sake at least, for fewer holes and more truth. Come along on 27/28th April to Waterloo East Theatre and see.

Lizzie Bourne is a graduate of The Oxford School of Drama. Skills include cello, singing and puppetry, as well as playwriting. http://www.spotlight.com/LizzieBourne. Her play ‘The Shipping Forecast’, directed by James Callas Ball, will be performed as one of six short plays in Whoop ‘n’ Wail Represents…Mayday at Waterloo East Theatre.

It’s been a few days since our last show – for the time being – at Waterloo East Theatre and Ali & Debs have had the chance to reflect on the wonderful response Whoop ‘n’ Wail Represents..The Launch has had. From the passion and commitment of all the talented creatives involved in putting on this show, to the thirst for new writing that the audience brought with them to the theatre. Although Ali & Debs are now reclaiming those parts of their lives that inevitably go on hold when producing a show, Whoop ‘n’ Wail Represents will be back in the new year. Until then, we thought we’d share with you a few of our rehearsal shots. 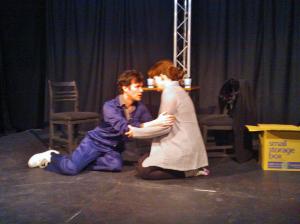 Michael Walsh and Ali Kemp in Cause for Alarm 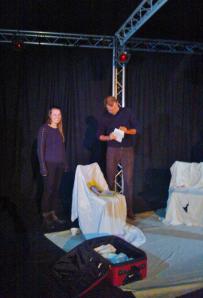 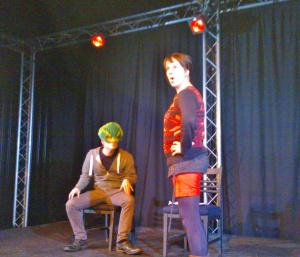 Gavin Dobson and Victoria Denard in The Final Frontier 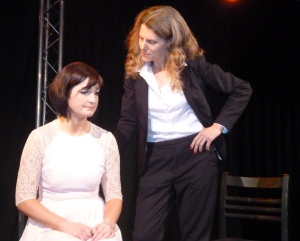 Amy Flight and Amanda Croft in On the Horizon 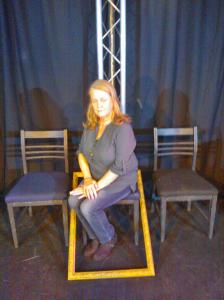 Gerri Farrell in My Bloody Laundrette 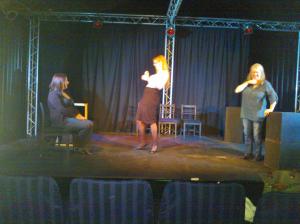 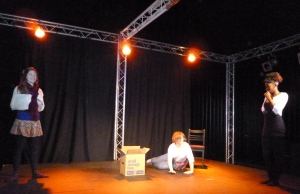 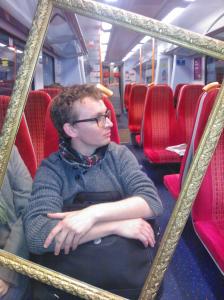 The rather lovely Tom Neill 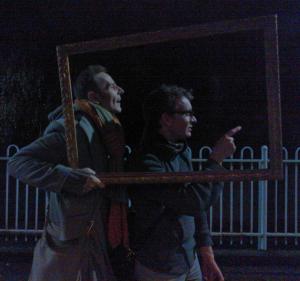 Paul Kevin-Taylor and Tom Neill have left the building – goodnight everybody!

It’s not easy producing a show that consists of 6 plays by 6 different writers, 6 directors and 6 casts but last Monday’s Whoop ‘n’ Wail Represents..The Launch was testimony to the talent and professionalism of those involved in this project. The technical rehearsal, led by the wonderful Tom Neill went seamlessly and even ran ahead of schedule at one point – for those of you in the business, you’ll know that this is almost unheard of – and the show itself, to a lovely audience, was a great success. We are looking forward to seeing the cast and crew again tomorrow (24th Nov) to do it all over again. It will be great to see you there too! Join:

It’s going to be another great show and come for a drink afterwards, just around the corner, in the Kings Arms. http://thekingsarmslondon.co.uk/

Get your tickets here: http://www.waterlooeast.co.uk/ 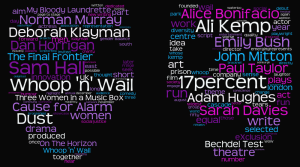